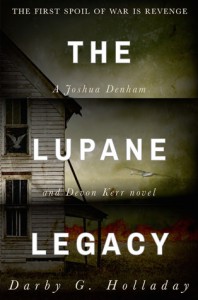 ABR's full Lupane Legacy audiobook review and many others can be found at Audiobook Reviewer.

Lupane Legacy is an interesting thriller that maintains two story lines coming together seamlessly into one climatic experience. Beginning with Patrick, a Zimbabwean, who survived his village’s massacre when he was five. Patrick has grown up keeping his head down and his eyes open. Waiting for years, he finally has the key information to expose those that massacred his village and family. He does not hesitate to implement his plan to share that information.

The second story line centers on Denham and Kerr who meet and fall in love. He is a former Marine born into a wealthy and established family; her, a member of a business focused intelligence agency hiding behind a banking career. Denham is sucked into the intrigue because of family and his money; Kerr because of her new found love and career. Throughout, intrigue and politics, as well as one man’s obsession blend the two story lines together to create an exciting thriller.

As with any first book of a series there is a lot of “building” characters and history. This can get bogged down at times but overall, it was not too much. I found Kerr and Denham’s passion for one another a little lacking but as I said it takes time to build those relationships.

It was interesting to see how far Patrick was willing to go to get revenge. It makes one wonder how far one would go to get revenge if in the same situation.There were threads within the story that called into question power vs corruption, revenge vs redemption along with relationship issues – work, love, truth and deception.

Several twists made the story interesting and jaw dropping. Nothing in this story was simple – there were so many hidden things that took a little bit to reveal. It was well worth the wait. It was a complicated but a well-constructed story. The characters were well developed although I thought the conversation between Denham and Kerr towards the end was a bit tame.

The narrator did an excellent job. He spoke clearly and kept his characters straight. His voice provided the correct amount of inflection for the emotion needed. Plus he has a pleasant voice.

I had no issues with the production, it was well done! I recommend this audio book. A must read if you enjoy thrillers.