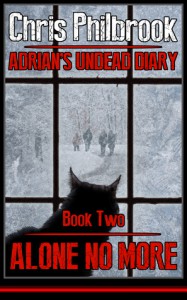 ABR's full Alone No More (Adrian’s Undead Diary Book 2) audiobook review and many others can be found at Audiobook Reviewer.

It has taken me way too long to get back to the simple world that Chris Philbrook has created for Adrian. By simple I mean pretty straight forward as far as a zombie apocalypse is concerned.

Beware that this is book 2 in a series, so it might do you some good to listen to the first book first. Even thought I believe that Alone No More can stand by itself if need be.

At first I was taken aback, because this book started in the past. With things that we did not know about from book one. I had to double check that I was listening to the correct audiobook. After this initial shock I found myself getting wrapped up in the added story lines.

If you thought that Dark Recollections was missing the back story of Adrian, you will be pleased to know that Alone No More will quench some of that thirst. Not only with Adrian’s story but the story of several other interesting characters.

I did find it quite oxymoronic that the title is Alone no More and Adrian was alone for the majority of this story. However when people started showing up in his life again the crap hits the fan. As we all know the most dangerous things in the zombie apocalypse are the other survivors.

Philbrook ended the book at the perfect point to make you need to listen to the next in the series, something that I will be doing soon.

James Foster is simply amazing in this series. There is something magical that happens with his performance when he is Adrian talking, I mean writing, in his journal. True chemistry, he creates a real conventionality, a sincere joviality at times and disparity at others.

Now I am not sure how these two got connected, more than likely random fate or coincidence. I will choose fate because an author needs a stellar narrator to bring his vision to light. Even though Foster is a relative newcomer to the narration world, I can not think of another that would give the listener the same experience.