Hallways in the Night: A Legal Thriller 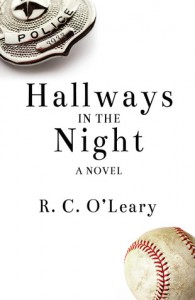 ABR's full Hallways in the Night audiobook review can be found at Audiobook Reviewer.

We are introduced to a pair of police detectives, Dave Mackno and his partner, that work a part of town that few want to. Because it contains much of the poorer population and tends to have crime and violence. Right off the bat we get to witness the racism that both certain police have and their assailants and vice versa.

Then while on a stakeout Mackno decides to investigate a suspicious situation. One that leads into a series of unfortunate events, between Mackno and the best baseball player the town has ever known.

The characters are so impressively deep and colorful. Each time introduces a new player we are treated to a very interesting recap of what makes them tick. This was the driving force of this story. This was so much more than a whodunnit court room battle. O'Leary made me care for all of the characters, to the point of wanted everyone to win in the end.

While everything plays out much like I expected, except for the twist at the end, that even got me. Normally I can see those coming a mile away, but not here. I couldn't stop listening. I needed to know more about the characters, much more than what was going to happen next.

This was my first time listening to Steven Jay Cohen, he didn't disappoint. Even though at first I didn't think I was going to be able to finish the story. Very soft spoken raspy voice, average characterizations. Eventually I started to love the voice and all the subtle nuances, that I do not think everyone would notice. By the end I had to double check that this wasn't actually narrated by one of my favorites, Fred Burman.