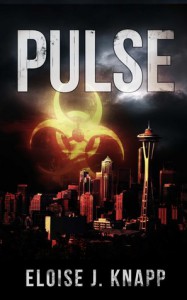 First thoughts about the cover of Pulse? A contamination symbol over a city? Hmm… Outbreak story! YES! What sort of cataclysmic event will unfold in this story..? I felt chills chase up and down my arms at the prospect of delving into such a story.

This story starts with bad sickly fish. Yes, fish. Makes me afraid of sea food. I love the idea of this. It brings the idea of something this horrible being possible. The main character is Dom. Dom is your typical male. Silly, sweet, funny, heels over head in love with his girlfriend… There are several stories going on at once, but they all tie in together eventually. One of the other characters to watch/listen is Adam. Adam is a CDC scientist trying to figure out a cure for this infection.

She stunk of sour milk and dumpsters. That line made my nose snarl up and my stomach clinch. I like that the ‘zombies’ could do rambling crazy talking. This gave the story just that much more horror to it. The end of chapter six was both horrible and awesome. I loved how the crazy zombie lady filleted someone alive.

These ‘zombies’ are infected with a parasite rather than a virus. The parasite they have affects the brain. More or less making them completely base instinct, no moral compass bonkers. It reminds me of the movie The Crazies.

What makes this a good book to read/listen to is the fact that it makes this seem simi-plausible. The ‘What if’ lingers. With strange things happening in the world today, the ‘What if’s’ are all to real. It brings to mind of outbreaks like Ebola, the Flu, Encephalitis. Ironically it mentions a general link to Ebola in chapter seventeen or eighteen.

Over all I enjoyed this story. It had a new twist to the ‘zombie’ vibe. I liked that. The narrator is Michael Bower. He has a nice voice. Sharp, crisp, and edgy at the right times. Perfect for a story like this. The book is 4 hours, 55 minutes, and 38 seconds long. The author is Eloise J. Knapp.

Warning - If you have a weak stomach, this book is not for you. There are lots of blood, guts, and horror, exploding stomachs, torture, and creepy parasites that will haunt your dreams.

This book left me with the feeling that things can change quickly. Sometimes things are completely out of our control. The best we can do is to keep ourselves safe. Try to keep those we love safe. And try to avoid those that would drag us down into their madness.