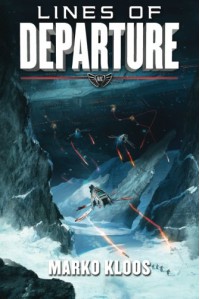 ABR's full Lines of Departure audiobook review and many others can be found at Audiobook Reviewer.

I have suddenly found myself listening to more military science fiction than ever before, and I have to admit that I love it. Every author letting their imagination go wild and create awesomeness from nothing.

Lines of Departure is, so far in my opinion, even better than the first book. Filled with meticulously crafted military battle scenes. Enough action was packed in to get me jacked like I drank too much coffee. I listened to this in one sitting and I think many other will do the same.

Kloos was able to dynamically evolve all of the characters that I loved from the first book. While introducing many others. A majority of the story took place on a distant ice planet where the situation becomes FUBAR. I can’t say much because I do not want to give anything away.

In over 1000 audio books that I have listened to in my life. I have never heard a performance like the one Luke Daniels gives in Lines of Departure. He injects every sentence with so much energy and emotion. Daniels is truly at the top of his game. While there was a plethora of characters for Daniels to keep straight, he gave each their own voice with ease. At part he made me jump out of my seat by actually yelling when a character was.

Another reason for the success of this audio performance was Daniels ability to change the pacing on a dime. Slowing down for the sentimental parts. Then exploding into a frantic blitz action and battles, without missing a beat.