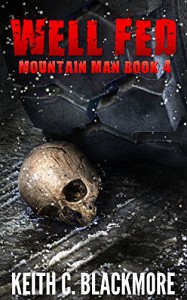 ABR's full Well Fed audiobook review and many others can be found at Audiobook Reviewer.

Gus is still at the farm. It has been a year and 8 months sense he burned Annapolis. The burns he suffered have healed but left terrible scars. Now he is content to keep watch over the farm for any zombies or rats. They don’t see very many anymore. That doesn’t mean they don’t have to search for necessary things, like toilet paper. Four men go out to see about a mansion that might yield some goods. They don’t come back. Gus is asked to check up on them. So begins the fourth book. Maybe the best of all.

This was a long one but well worth the time. I had the audio version and was hard put to stop for the night. The characters in this series are so well developed you just have to cheer for them. Gus a lonely man doing his best to survive in a deadly new world. He drinks too much and maybe if he were sober he would not get into so much trouble. He had survived for two years on his lonely mountain. Scavaging from empty houses in the nearby towns. He fought zombies, his favorite weapon is a silver bat. During one foray he saves a man, Scott, from the zombies and nurses him back to health. He meets a woman, falls for her, and ends up killing her. This was after she betrayed him and beat the S____ out of him. He killed a mob of zombies and then an invasion of zombie rats, big ones. He blew up his home and was severly burned. Why is this man not dead?

During the telling of this tale we get a vivid, graphic, bloody look at what very well might happen if we suddenly lost all technology and survivel was a matter of kill or be killed. Blackmore delves into the basic downfall of humanity and how some of the worst make it to the top. Only to fall, hard. He follows the dregs as they happily bring more death to the few survivors. Serial killers flourish, megalomaniacs rise and fall, and some just like to torture for the fun of it.
Mr. Bray did a splended job of bringing this book to life. I didn’t have a problem with his voices and liked the tone of his telling. Everything was clear and easy to understand. Audio production was without fault. I sure hope there is another book coming but the ending of this one was excellent.

Audiobook purchased for review by ABR.