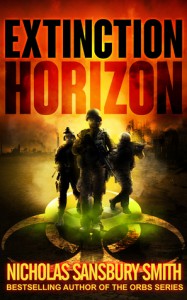 ABR's full Extinction Horizon audiobook review and many others can be found at Audiobook Reviewer.

During the Vietnam war a new weapon was created and used. For 10 years, this new weapon runs amok in the jungles killing randomly and thoroughly. Rage fueled, Brett was the first.

“Only one thing mattered, KILL.”

Years later, Master Sergeant Reed Beckham and his Delta Force Team are told to enter the jungles and find the top secret medical lab and research facility that has gone off line and dark. Beckham and his team enter the facility expecting one enemy only to find another totally different and deadly one. This enemy cannot be seen but it is a deadly enhanced strain of Ebola that turns men, women, and children into raging flesh ripping monsters. The infection is incurable and highly infectious. Once infected, humans turn into destructive beasts that have one common goal – kill.

Kate Lovato, CDC scientist, is faced with saving the world. Rescued and supported by Beckham, she seeks the cure or at worse another deadly monster that will destroy the variant strain of Ebola infected humans. She’s racing the clock as the disease has already spread and with less than 8 days before humankind is extinct, she has to work quickly. Left on a deserted island in a top secret military facility, Lovato creates a weapon but is it the right one?

I enjoyed Extinction Horizon very much. The plot was very well developed with several twists and turns. A cliffhanger ending but then again, when humans are faced with extinction … no one wants it to be over! Characters are well developed; readers are able to connect with all including the man responsible for ordering the weapon. I liked knowing how the disease came into existence and how it spread. There were no questions other than the most important one – how to stop it.

Bronson Pinchot did an excellent job of narration. It was clear who was speaking and words flowed flawlessly.

Production was excellent. No issues with background noises or any other distractions.

Anyone who listens to this book will enjoy it but especially zombie enthusiasts and conspiracy theorists will LOVE this book!