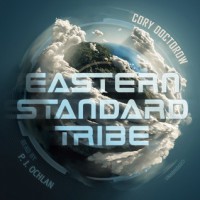 ABR's full Eastern Standard Tribe audiobook review and many others can be found at Audiobook Reviewer.

This quirky novel is based in the near future. You’ll recognize much of the tech, some a stretch from what we have now, some just around the corner, and others, just cool stuff invented by the author. The effect is a somewhat surreal futuristic world that you can almost relate to; just a bit removed from what we know now, like a very realistic dream.

The term “Eastern Standard Tribe” refers to a loose knit group who operate on the Eastern Time Zone of the United States. It is a group or tribe of likeminded people who are digital friends. Most have never met each other but have so much loyalty they help when one of their members get in trouble. Think of it as Facebook friends who are actual friends. It is an interesting concept that anyone on the Internet can relate to.

Throughout most of the book, you the listener are not really sure what the main character does for a living, why he has so much time to screw around, or what his extremely strange friends do either. All of it comes clear and is well worth the effort. You are also not quite sure if the main character is completely sane or if all this is some kind of psychotic episode. Again, stick with it, it’s well worth it.

It is a fun, 20 something book with a SciFi twist, a kind of “Generation X” in the 21st Century. The characters are well developed and likable (even the ones you hate). There is an especially funny scene where the main character and his girlfriend are being mugged in London. He manages to talk them out of it with his keen wit only to end up being interrogated by the bumbling police for half the night.

Narration is by P.J. Ochlan, who does an excellent job. He holds the right sense of irreverence throughout the story and the accents are well done.

Eastern Standard Tribe will not be for everyone. It is quirky and strange, sometimes breaking the forth wall by speaking directly to the listener, even revealing the structure and mechanics of the plot. It doesn’t take itself seriously and is a good ride. Listen with that in mind and you will enjoy the book quite a lot.