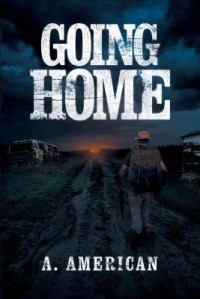 ABR's full Going Home audiobook review and many others can be found at Audiobook Reviewer.

The cover of this book is right on. One man, a long road ahead of him and unknown dangers to face.

Starts out with Morgan Carter sitting in his car trying to figure out why is stopped running. He tries his cell and it is out too. So is his LP. All electronics are dead. EMP or CSF he decides and it must have been a big one. Good thing he had his survival pack with him. It’s 250 miles home and he only has two feet to get him there. Morgan is just over 6ft. and around 250 lbs. “Not all of it muscle.”

When he allowed, a young college girl, Jess, to join him the writer changed to third person. It was also that way when Thad, a huge Black man, asked to join him. When it was Morgan it was always first person. Three strangers with a long trip ahead. They were all trying to get home. Morgan had the knowledge and equipment to help them survive and Thad was intimidating on his own. Jess was learning to live in the new world..
I have read several other novels along these lines. I liked W. Johnston’s series. What made this one a little different and interesting was the first person telling of Morgan’s part. Morgan’s take and insights into what had happened and was happening gave life to his journey. He knew what to expect from other people they would meet. “Trust No One” was his motto. Most people he met were just confused and afraid. Others were vicious bullies who took what they wanted.

If you like this action/adventure survival type of book you won’t go wrong with this series.

Read by Duke Fontaine and he did a good job of it. His narration was clear and concise. Could have done better with some of the voices, but no big deal. I liked the sound of his voice. It was an exciting novel.

Production was faultless and smooth. Not jumps, empty spaces, or static.