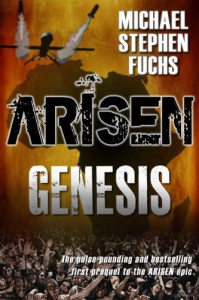 My full Arisen: Genesis audiobook review can be found at Audiobook Reviewer.

The cover depicts a huge horde of walking dead and a single drone aircraft. This makes me think that there is going to be huge military style action. Lots of zombies terrorizing the soldiers. Meaning, to me, gun fights and remote controlled hellfire everywhere.

I devoured Arisen: Genesis like there was no tomorrow.

But not at first. Not sure what I was expecting the beginning to contain. The first third of the story was the only place where my attention was swayed. Characters have to be built up in the listeners mind for anything to make sense, I get that. Things have to be put into motion for the impeding apocalypse to being, I get that too.

But I hung in with it and once the action started it didn't stop and I was all in. Slowly the soldiers began to realize that they were dealing with the undead and not simple civil riots or a rebel invasion. Political and civil unrest surrounded a small CIA outpost in Africa. Strange reports of sicknesses started coming in. Zack Altringham, an analyst, didn't think much of it. Until a horde as at his doorstep.

Suddenly he and a small band of SEALs, thank God for them or he wouldn't have stood a chance, are fight for their lives against zombies and rebels. The thrill ride continues from here on out. Commandeering and armed drone and with all of the supplies and ammo they can carry. They make their way to safety.

Even though I have never been in a battle nor in the military Michael Stephen Fuchs was able to bring me into the band of brothers. Making me feel as if I were there experiencing everything happening around me. He was able to create dynamic military men not the simple minded stereotypical grunts. I was able to connect with them on a level that only a really good writer can create.