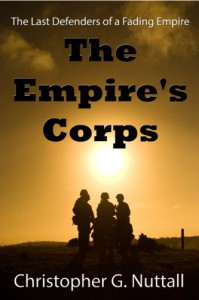 I always get excited when I am able to get my grubby hands on a new audiobook before it hits the tubes of Audible or anywhere else for that matter.  Not sure how I got to do this multiple times now. But it makes me feel like a kid on Christmas morning.

To add to the excitement, this sounds like it could be a very intense story. Epic space conglomerate, crumbling on top of itself. With a band of Marines battling to defend or save the integrity of a sprawling galactic empire.

The Empire's Corps starts off with a good description of the enormity or the empire. Including the intricacies of the political scene that seem enormous. Imagine here on Earth living on a city block that houses 20,000,000 residents, I can't even fathom.

Christopher G. Nuttall has created not only an interesting world but an entire universe full of planets inhabited by humans. With hundreds of planetary cultures I can only imagine were this series will go.

This audiobook is heavy on the dialog, as there are a lot of political/military discussions. There were several spots where I thought I was having déjà vu as there were discussions and planing with some of the higher ups, then felt like the same discussion happened with the grunts. Because of this I found my mind wondering, rewinding, more wondering, until I finally heard what was happening.

Our Marines that were sent to a distant plant after their commander spoke the truth to those he shouldn't. Quickly find themselves in the middle of corruption all around them. They must find to stay alive.

For fans of military science fiction The Empire's Corps is a no brainer. Full of the political and military intrigue that would would expect. With a plethora of characters, you will be sure to find one that you can relate to.

Jeffery Kafer delivers a solid unwavering performance. I haven't listened to him much, but he seems to excel with the no nonsense even keel military dialog. Easily quickening the pace for the many action sequences.

Interestingly enough I don't have a lot to say about Kafer. Everything he did was good. Kind of silly to but he almost faded into the story.