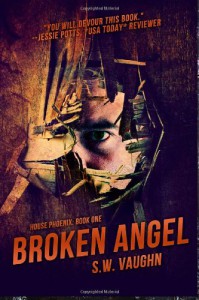 First thoughts about the cover of Broken Angel? Well, that’s a bit scary. The wall looks cracked, the door looks like it is in shadow. Is it a basement? Is it a dungeon? Is that blood on the floor?! It had my brain asking several questions before I ever started the book. Good way to draw the reader/listener in.

This story is about Gabriel Morgan. He’s trying to find his sister. He feels he is responsible for her, he must take care of her, save her. In doing so, he unwillingly ends up getting tied in with underground fighting. He fights to protect his sister.

The main ‘bad guy’ for most of this book is Slade. Honestly, this guy is an A-Hole to the max. Cruel, angry, narcissistic, manipulative… He sure makes a great bad guy for sure! I wanted to punch.

Troy Duran is the narrator for this story. I loved his voice. Troy Duran has a sort of throaty growl in his voice that I found lovely. I loved the accents he gave to some of the characters in the book. This book is 9 hours, 1 minute, and 40 seconds. Well worth the time.

There are several descriptive bloody fight scenes. Kinda mixes boxing, mixed martial arts, free style, and flat out brawling. If you aren’t into MMA or similar fighting styles, this book is not for you. It has a great story line about the five houses that run the fighting ring as well.

The one mistake the narrator made that I caught was at the end of chapter six. It was a small one word oopsie, but it still brought me out of the story. The word bow. He read it as bow as in bow and arrow. It should have been said as one would bow a head. As in bend forward or curve downward. Same spelling, but different. Over all I greatly enjoyed this story and am looking forward to the others in this series. They are on my list for sure.

When I finished this book it left me with the feeling that sometimes people are not what they seem. Even the best person has their dark side. There will always be people in your life that you think you cannot live without, but you might have to cut ties and walk away. Sometimes letting go is the only way to move forward.