Dawn of the Planet of the Apes - The Official Movie Novelization 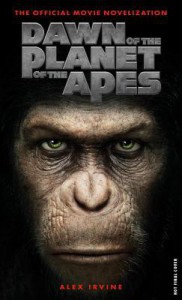 My full Dawn of the Planet of the Apes: The Official Movie Novelization audiobook review can be found at Audiobook Reviewer.

This is a retelling of a classic tale that I believe will continue to be retold as society continue to develop and change. Paired with a very capable narrator, it will be very difficult for this movie novelization to fail.

Humans have been all but wiped out by a mysterious virus that originated in the apes that were being experimented on. 10 years have passed since the first movie, I don't think they made a novelization of it. This must be some sort of a newer way to gain publicity. That doesn't bother me at all. Cesar has led his band of ape into Muir woods. Successfully creating a new society where ever type of ape lives together in harmony. As their golden rule states: "Ape shall not kill ape".

Everything is going fine for our primate friends. Until they had the bad luck to bump into some human survivors of the plague. This is where the internal struggles of some of the tribe members comes to the surface. Cesar is overthrown as leader and must fight, life or death, to regain his authority.

I think the only reason the humans are even in these stories is to make people want to read or watch the movie. All they were were the antagonists to our protagonist apes. I was able to fully relate and care for man of the apes in the tribe.

The same day that I finished listening to Dawn of the Planet of the Apes: The Official Movie Novelization, the wife and I went to the theater to see it on the big screen. Boy was I disappointed with the movie. Don't get me wrong the movie was some fun eye candy, with ridiculous 3D animation that was out of this world. Yet the movie version left out so many, what I thought were, key items in the plot.

I would highly recommend listening to instead of watching the movie. I got more out of it.

The movie focus mostly on the human ape interactions while the audiobook focuses on the ape ape interactions. That just so happens to have people in it. Oh and the afterward of the book lays out a great way to continue expanding this new classic retelling.

What can I say about Christian Rummel, only one of my favorite narrators. He was easily able to breathe life into this story. Yelling when it called for it. The jumbled slightly distorted speech of Cesar was perfect. The vocal range of a guy who seems to have a pretty naturally deep voice is quite extraordinary. Fill every sentence with the proper emotional filled ear candy.