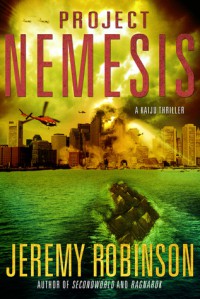 My full Project Nemesis: A Kaiju Thriller audiobook review can be found at Audiobook Reviewer.

Are you a fan of giant monster invasion stories? Or, are you just a fan of good old action adventure, stop the bad guy, or monster in this case, or the world as we know it will be destroyed? Well, you're in for a treat with this tribute or throwback to the classic black and white movies of yesteryear. Combining great action sequences, interesting characters, military involvement, oh yea, and a giant monster hellbent on its mission of destruction. Project Nemesis has been on my wish list over at Audible since it came out and for whatever reason I found ways to choose others to listen to first, don't make the same mistake I made by waiting. Jon Hudson is the lead investigator for a special branch of the Department of Homeland Security that only deals with paranormal investigations. He thinks its a joke and rest of the DHS thinks he's a joke by filling his time examining Sasquatch sightings. However, it is this very task that takes him to the backwoods of Maine where he discovers a secret research facility. Even though he didn't want to get involved he was brought in by gunfire when he got too close. This is where scientists were working on human gene splicing and created the Kaiju, that surprisingly started out small and continued to grow taller throughout the story. Jeremy Robinson was able to bring action, tension, horror, love and romance, to what could have been a very sterile and straight forward tale. My favorite aspect was the changing of the point of view to the monster itself, giving me insight on what the mission really was and what was going on within.