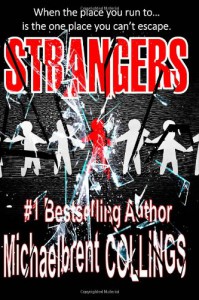 I knew when Michaelbrent Collings started the book with veteran police officers vomiting everywhere the book was going to be an experience. Michaelbrent has done what few authors have been able to do ---- he scared me half to death and kept me up most of the night thinking about my secrets and who I trust without a second thought.

This is about a family who has suffered a devastating loss of an older son and their mechanisms to deal with his death and their now fractured family. On the anniversary of their son’s death, the family once again struggles to become “normal” and fail. Although there are some glints that normalcy has returned it is but an illusion.

Waking from a solid night of sleep, a family of four (mom, dad, and 2 teenagers) finds themselves sealed in their home with no escape route. They are tormented and unmercifully tortured by an unknown stranger. Through phone messages left by schools and HR personnel over the course of a week, it becomes clear that no one is coming to help them. Although it is the 21st century their connection to the outside world is tenuous at best – twitter, facebook, texting. NO ONE has cared enough to check on them in the week they have been missing! Although as a reader, one might believe this to be absurd, Michaelbrent undeniably demonstrates otherwise.

A hidden stranger playing a deadly game and who has become judge, jury and executioner has decided that only those who confess their secrets willingly will live – moving from room to room searching for a way out, corpses are found, secrets are revealed, and more corpses are made.

In reading this horrifying book, you WILL change how you open your door to strangers, who has access to your home, family and secrets! You will no longer be passive because Michaelbrent won’t allow it as he puts the fear of strangers in you!