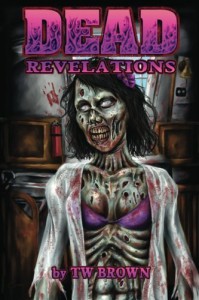 I am excited to rejoin Steve and his survivors, the geeks and their rescued girl Heather. I like the vignettes also, a good snap shot into the worse and the best of humanity.

DEAD: Revelations: DEAD, Book 2 begins with Steve and his group leaving the security of serenity base to find they’re lost friends. While it sounds like a typical scenario, the sequence of events up to and after their leaving makes it not only plausible, but like something I would do. I really enjoy the character building T.W. Brown does here, I find myself rooting for the good guys.

They eventually run into a predicament where Steve’s leadership skills are put to the test, not only in the future but also immediately. He allows another group of survivors join up with them even though there is a child that has been bitten. I know what you’re thinking because I was thinking the same thing, that is the first thing you DON’T do in a zombie apocalypse. But think about it, could you pick between a whole group of survivors starving or telling them they would have to finish off the child first? Steve did what I would’ve done and put it off for later, unfortunately his adopted orphan Talia was caught off guard by the infected child.

There are many vignettes throughout, which are basically mini stories inside of the real story. It is just my opinion but these got a little disturbing, even for me. We also get to meet a band of zombie geeks, who have to leave one their one behind because of a bite, more about them in a little bit.

The two groups meet up in the end and we are left dying to know what they will do with this new immunity information. As I listened to this I found myself really wanting the good guys to come out on top. The switching from group to group and vignettes can be a bit confusing, but a mix of good plot line, good character building, and good narration made it well worth rewinding once in a while.

Then there is Kevin and his group of geeks. They manage to rescue a teen super star, her senator mother, and pregnant sister, only to get robbed at gun point by Shaw and his gang. The three of them escape, and rescue another girl from a sick psychopath. One of them gets bit and they put him down, but in the meantime they are waging a war against Shaw trying to re rescue the females. In the middle of all this the guy who got bit is apparently immune and returns.